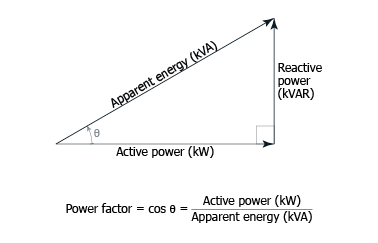 Q.1.What is the phase relationship between the supply voltage and current flowing through a purely resistive circuit?

Ans.Both supply voltage and circuit current are in phase with each other.

Q.2.What is the phase relationship between the supply voltage and current flowing through a purely inductive circuit?

Ans.In a purely inductive circuit current lags behind the supply voltage by 90° or π/2 radians.

Ans.Inductors or choke coils are made of the iron core because large valued flux densities cab be produced in iron cores and so inductances of large value can be had. Air-cored inductors become too much bulky to provide an inductance of a required value.

Q.5.What do you understand by the power factor of a circuit?

Q.6.What do you understand by active and reactive components of current in an ac circuit?

Ans.The current component which is in phase with circuit voltage (i.e. I cos ϕ) and contributes to active or true power of the circuit is called the active (watt full or in-phase) component of current

The current component which is in quadrature (or 90° out of phase) to the circuit voltage (i.eI sin ϕ) and contributes to reactive power of the circuit is called the reactive (or wattless) component of current.

Q.7.What are active and reactive powers? Draw the power triangle.

Ans.The power which is actually consumed or utilized in an ac circuit is called the true or active power of the circuit. Power is consumed only in resistance. It is given by the product of the circuit voltage V, current I and power factor cos ϕ i.e. P = VI cos ϕ. It is expressed in watts. A pure inductor and a pure capacitor do not consume any power, as in a quarter cycle power whatsoever power is drawn from the supply source by these components, the same is returned to the supply source in the other quarter cycle. This power that flows back and forth (i.e. in both directions in the circuit) or reacts itself is called the reactive power. This is also known as wattles power.

The reactive power of an ac circuit is given by the product of voltage V, Current I, and sine of the phase angle ϕ i.e. Reactive power, Q = VI sin ϕ. It is expressed in reactive volt-amperes. The power triangle is shown in the figure below.

Q.8.What is the relationship between the supply voltage and circuit current in a purely capacitive circuit?

Ans.In a purely capacitive circuit, current leads the applied voltage by 90° or π/2 radians.

Q.9.What is the effect of frequency on inductive reactance?

Ans. The inductive reactance of an inductor increases proportionately with the increase in supply frequency i.e. XLα f.

Q.10.What is the effect of frequency on capacitive reactance?

Q.13.What is meant by resonant frequency?

Ans.When in an R-L-C series circuit the inductive reactance equals capacitive reactance, the circuit is said to be in resonance, called the series resonance.

Q.15.Why is the series resonance called the voltage resonance?

Ans.Since in series resonance, the voltage across inductance and capacitance is maximum, it is called the voltage resonance.

Q.17.In a series RLC circuit, the voltage across L and C at resonance may exceed even the supply voltage. Why?

Q.18.What is a resonance in a parallel circuit?

Ans.Since in parallel resonant circuit, circulating current between the branches is many times the line current, such type of resonance is called the current resonance.

Q.21.What is meant by the Q-factor of series resonant circuit?

Ans.The Q-factor of a series resonant circuit may be given as the voltage magnification that the circuit produces at resonance. Q-factor at resonance, Q = R tor L 2rtf,L 1 R C

Q.22.What is the Q-factor of a parallel resonant circuit?

Ans.Q-factor of a parallel resonant circuit is defined as the ratio of the circulating current to the line current at resonance or as the current magnification.

Q-factors for series resonance and parallel resonance is the same.

Q.23.What is the power factor of an R-L-C circuit under resonant condition?

Q.24.At resonance, the current is maximum in a series circuit and minimum in a parallel circuit. Why?

Ans.At resonance in a series circuit, the inductive reactance is equal to capacitive reactance in magnitude but opposite in phase and so nullify each other and thus impedance is minimum and equal to the resistance of the circuit and, therefore, current is maximum.

But at resonance in a parallel circuit, net susceptance is zero, the admittance is, therefore, minimum and is equal to conductance of the circuit and the current, being the product of supply voltage and circuit admittance is minimum.